Prezent is a mobile application to make the experience of selecting a gift for a person fun and less stressful. 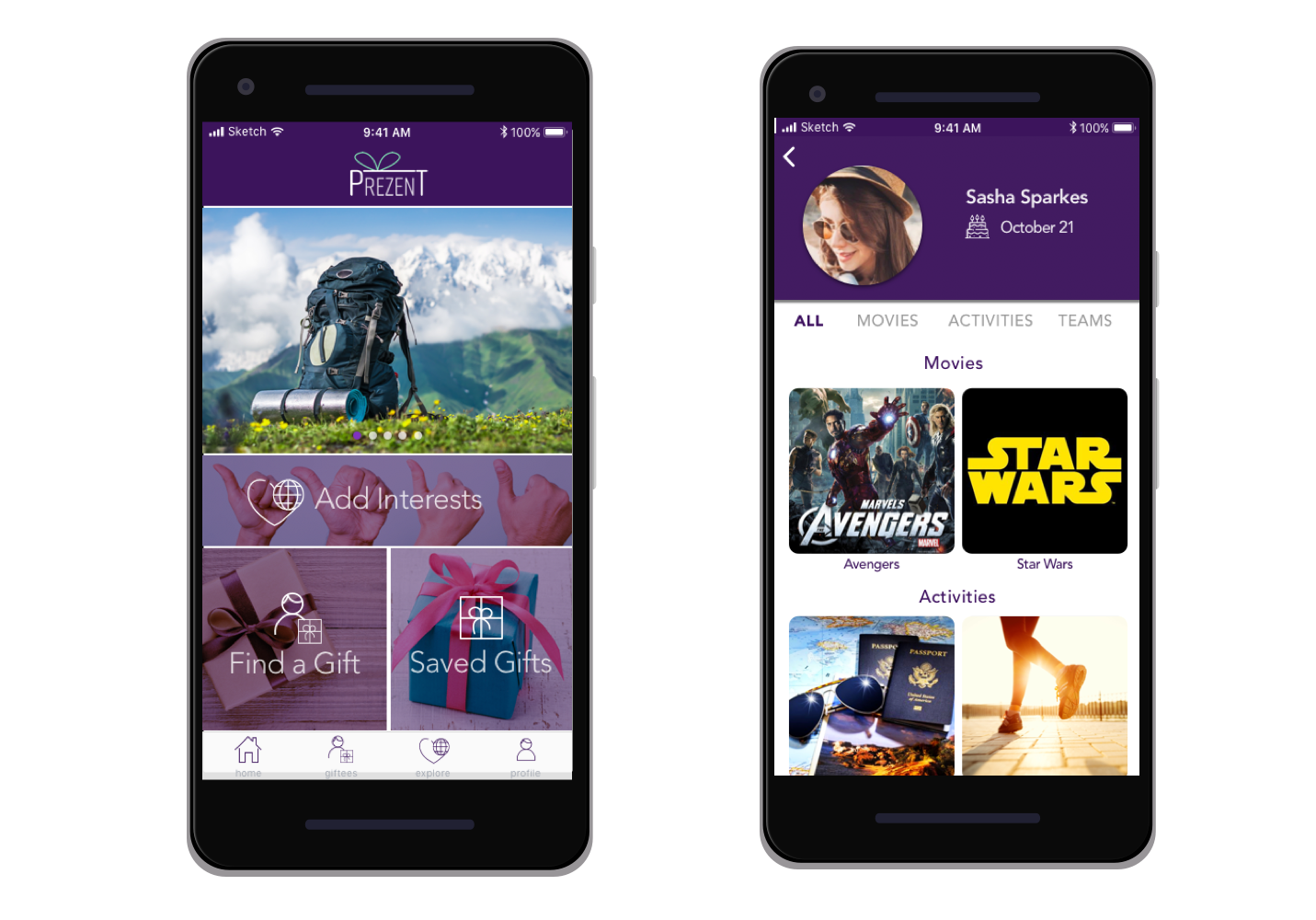 Gift giving is hard and stressful. People don't particularly enjoy the whole process of selecting and giving a gift to a person, all the while hoping the person they're shopping for would not hate it. That's where Prezent comes in! We chose to design a solution for this fun and challenging space.

Prezent is a fun interactive social application through which users can maintain a profile or repository of their own likes and interests. They can also view someone's profile and generate gift ideas based on it, complete with store information to find such gifts. Through our research findings, we focused our goal on assisting individuals in choosing a well-informed gift for someone whom they have limited information regarding.

Our user testing feedback showed that Prezent was useful in the gift shopping process.The SUS score measured was 86.5, with a standard deviation of 7.52 and a median of 87.5

Disclaimer: All the research was conducted with a handful of participants and is not representative of the entire user group.
We initially started with the idea of gift-giving for kids, especially by individuals who are unfamiliar with kids. We conducted research through a variety of methods to collect broad information on gift shopping patterns of people, and to truly understand the trends and difficulties people encountered in the process, for both kids and adults.

Questions we asked over the course of our initial research

We deployed a survey for which we got over 200 responses. It branched based on whom they most recently shopped for (kid or adult).

We conducted interviews with 14 individuals, and asked them a set of questions in 2 different scenarios, for when they last shopped for a kid and for an adult. We used an affinity diagram for analysis. The key takeaways were the commonalities amongst the desired gift attributes (eg: wanting the gift to be unique and sentimental) and the goals different people wished to achieve with their gift (eg: wanting their gift to be useful). Some were specific to shopping for children (eg: wanting the gift to be educational). Further insights included how information about the receiver known to the person influenced their choices, and how they went about finding new information. 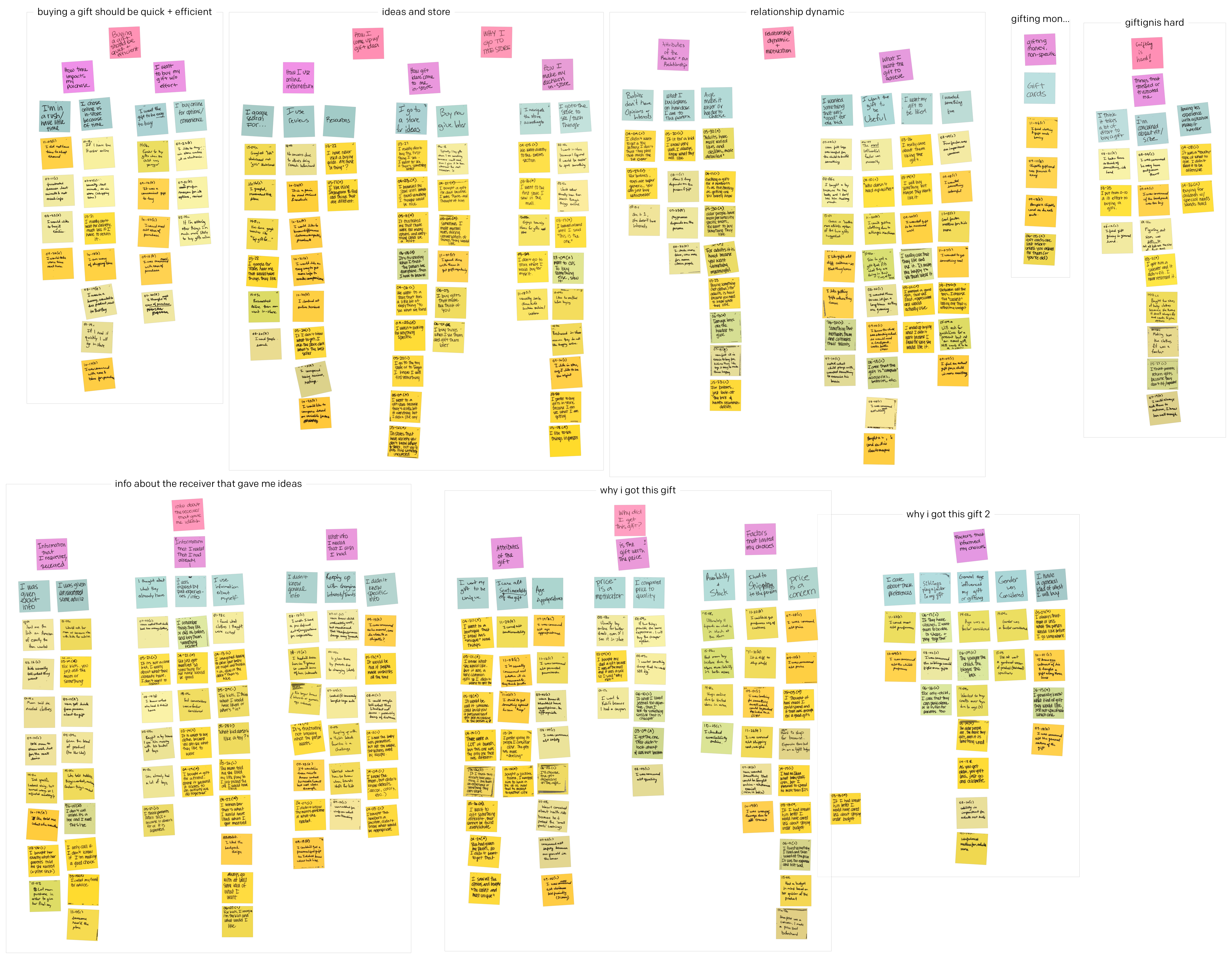 Affinity diagram. Fun fact - It took us a whole 7 hour session to gather all the data and analyze it.

Based on the insights we received from the interviews and survey, we decided to experience and learn firsthand about the in-store context of shopping for children. We conducted two in-store walkthroughs - Target and Toys R Us. We found that while there was a lack of information in-store for buyers to rely on, the ability to visually browse a variety of items seemed to be an appealing process. This was backed up by anecdotal data from the interviews. 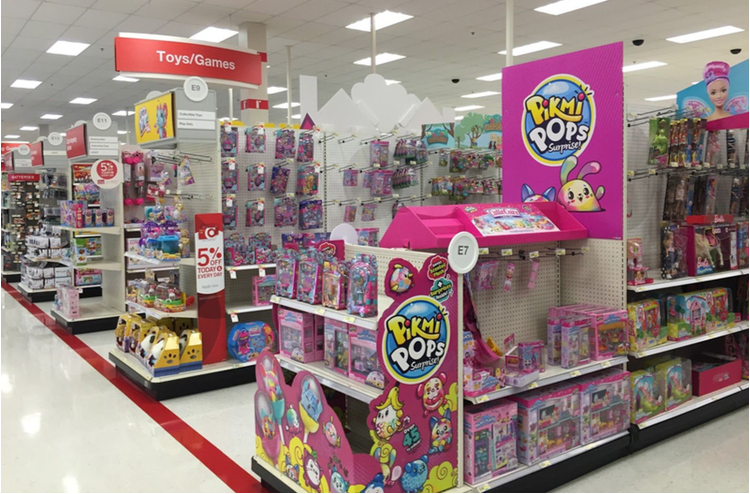 From the interviews and survey, Amazon.com was the preferred choice of platform due to the variety, reviews and fast shipping. Analyzing the website showed various options such as themed categories (eg: Kids' birthdays), age-wise filtering as well as 'Best Toys of the Month'. Even after filtering there were an overwhelming number of options. A drawback was that it didn't give the users options of touching and feeling before picking out a gift.

Research on legacy systems showed that there were attempts made to leverage machine learning on Facebook 'likes' to find out gift ideas for a person. However, this did not seem to have taken off for reasons unknown.

Having abstracted the fundamental tasks involved in the gift-giving process as well as decisions the user has to make before coming to a conclusion, we created a user flow as shown below. 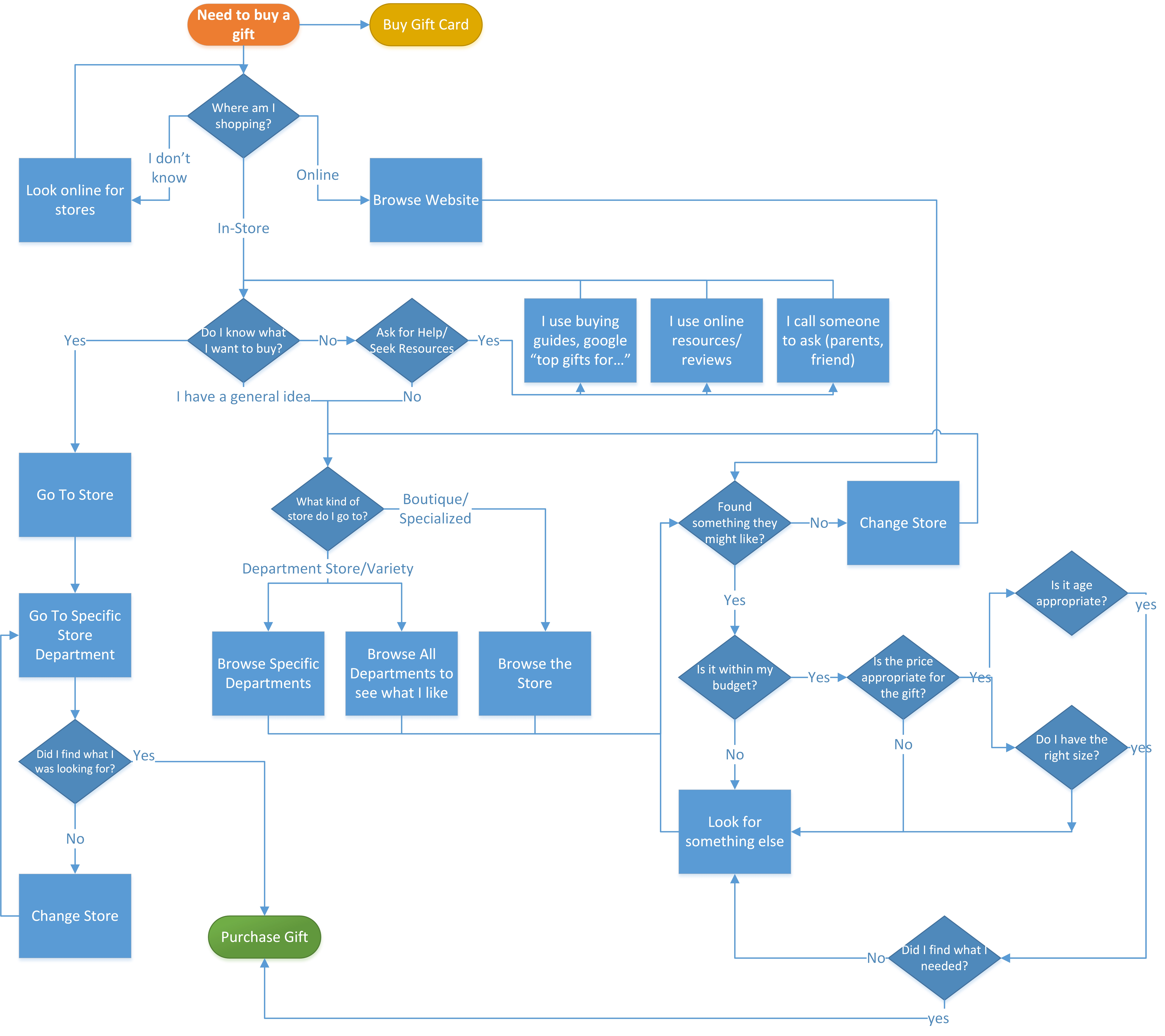 From our research we determined the following that:-

There were certain key channels that we identified as being part of a successful gifting experience:- 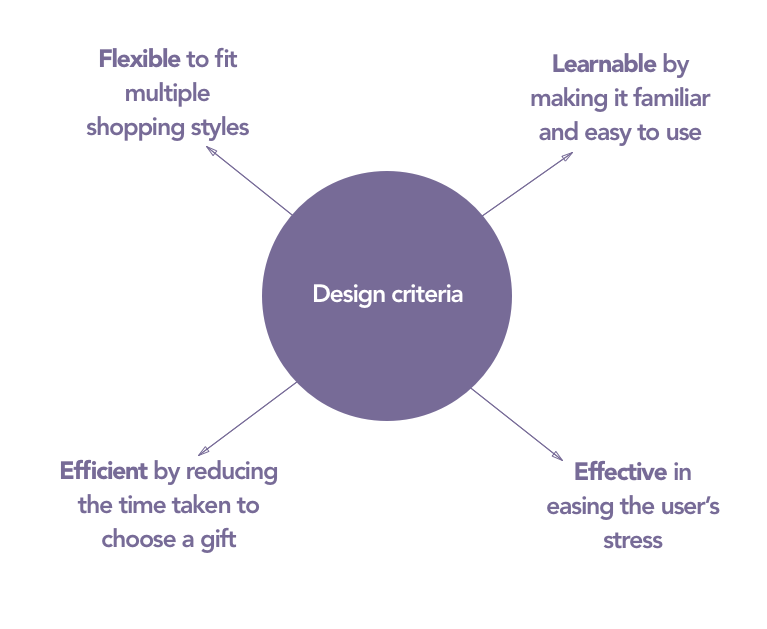 From our research we determined the following as key features of our final solution:-

Once we made the pivot, we defined our user group as customers who have limited knowledge about the people they shop for, but still genuinely care about purchasing a gift that matches their preferences. Some social contexts which matched this (but not limited to) were:

We built our personas to cover such situations and also across different shopping styles and goals as informed by our research. 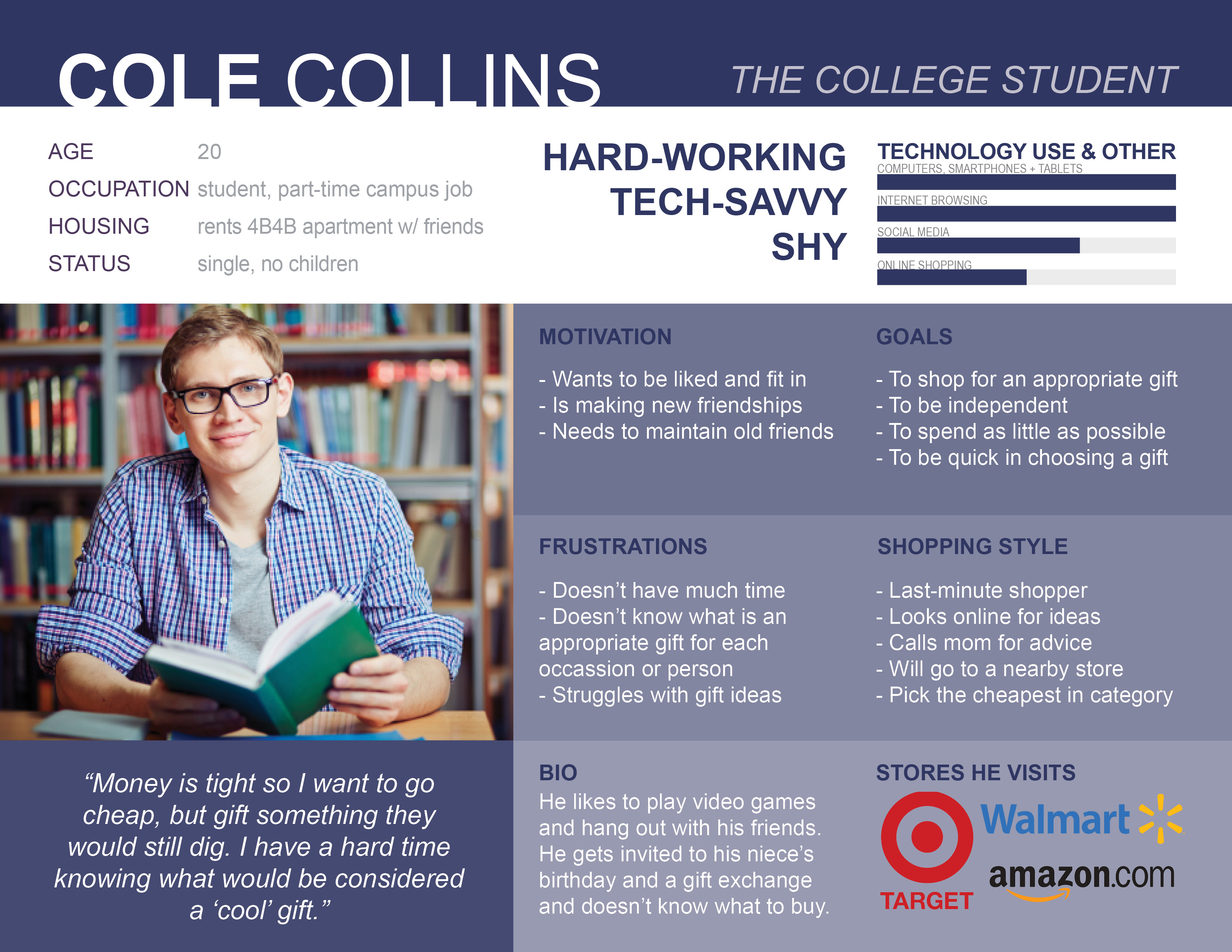 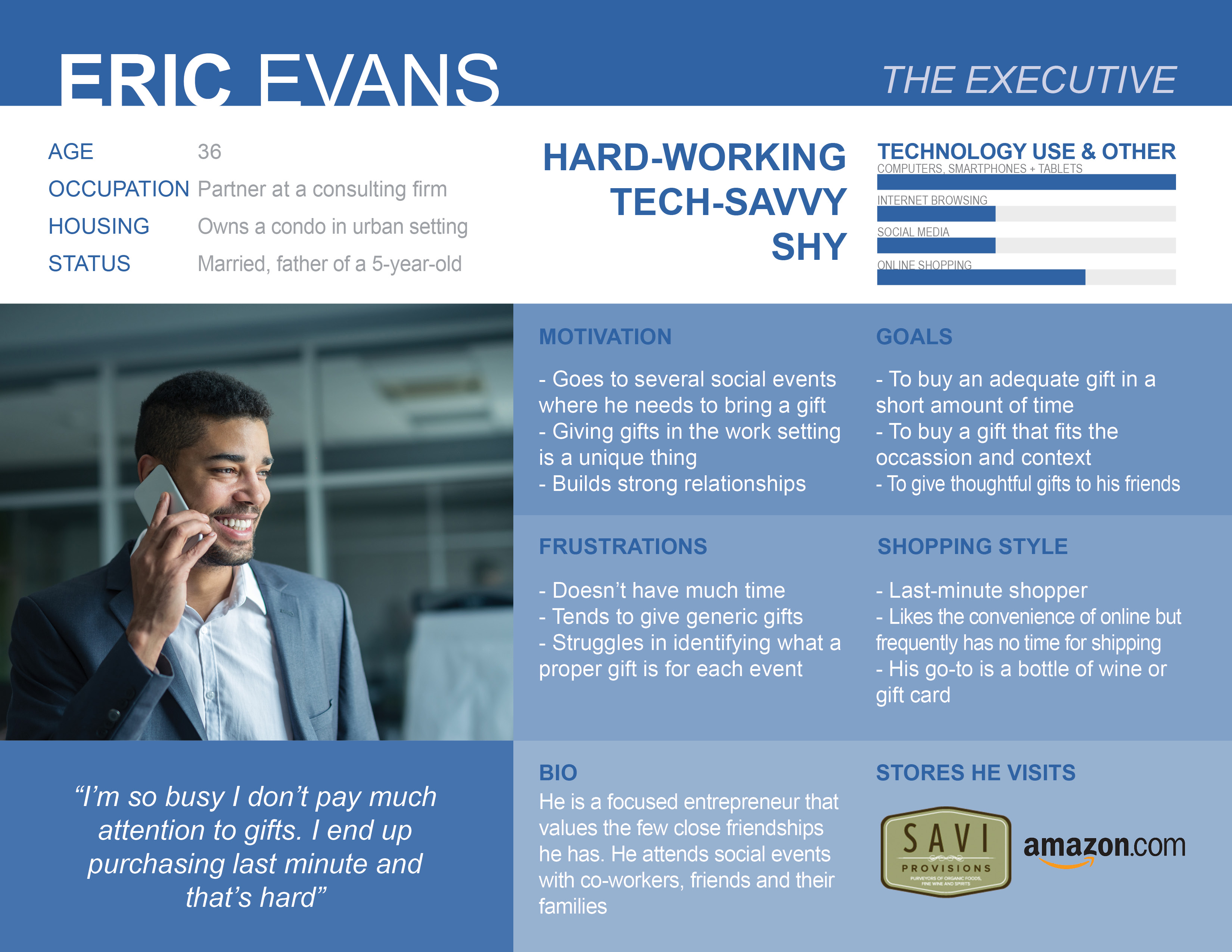 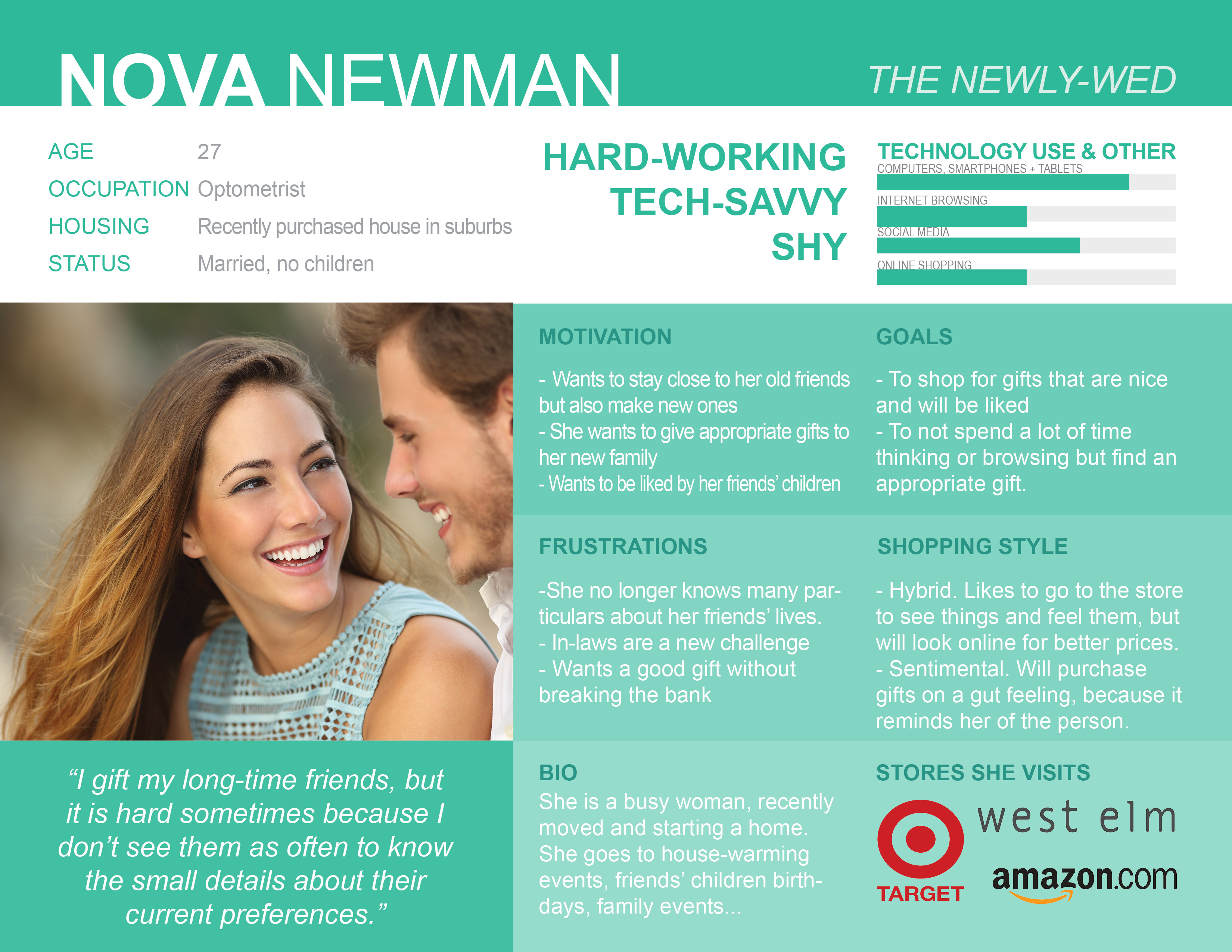 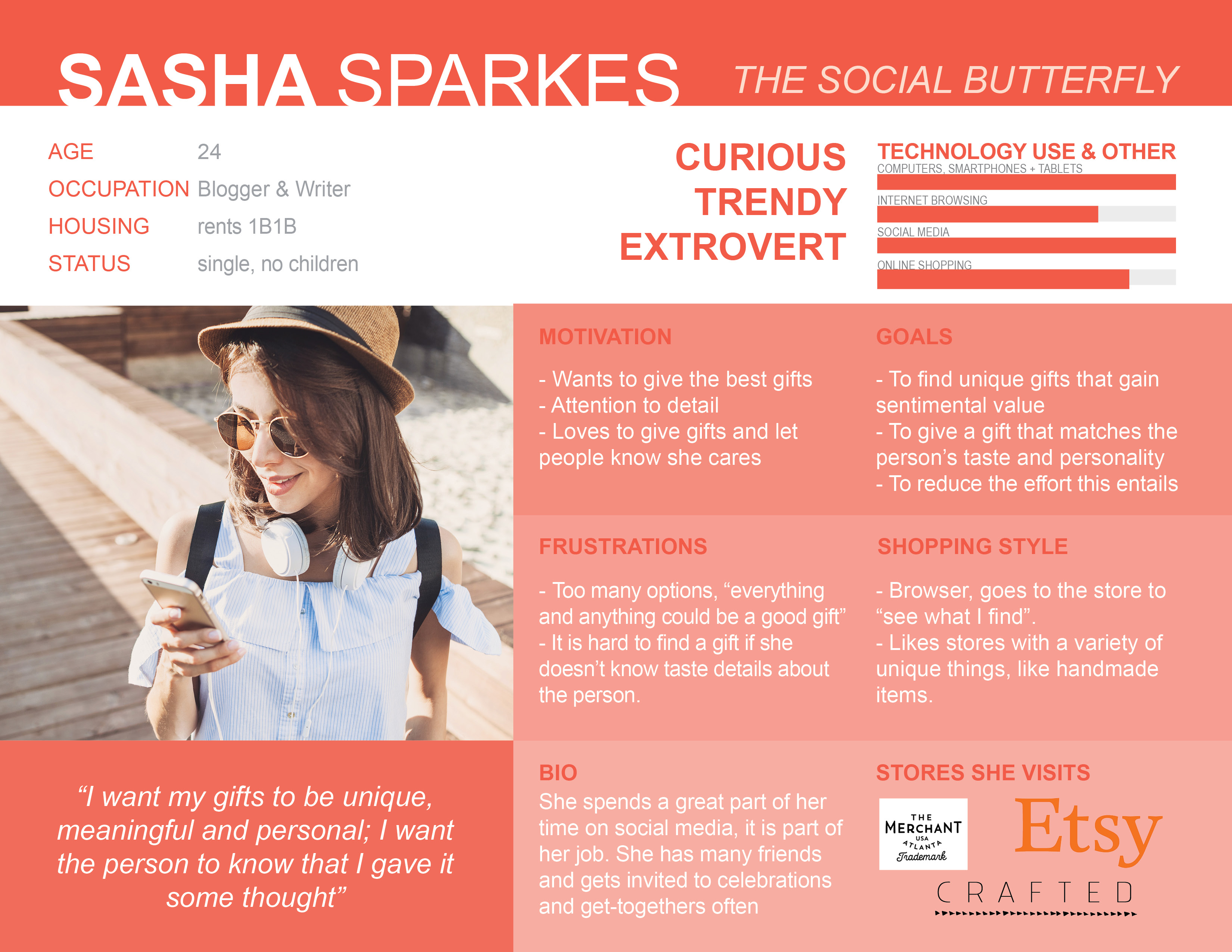 For our "informed brainstorming" session, we came up with a wide variety of ideas for systems to provide a way to collect information about the receiver of the gift and help the gift buyer come up with ideas for the gift. Broadly, the ideas were categorized on the basis of whether the goal was collecting data on the preferences, or providing gift recommendations, or a hybrid of both. Our top three ideas were:

In our first round of ideation, we went for a divergent approach, by sketching out individually each of these ideas. We then discussed strengths, weaknesses and inspiration for each of the sketches as a group. 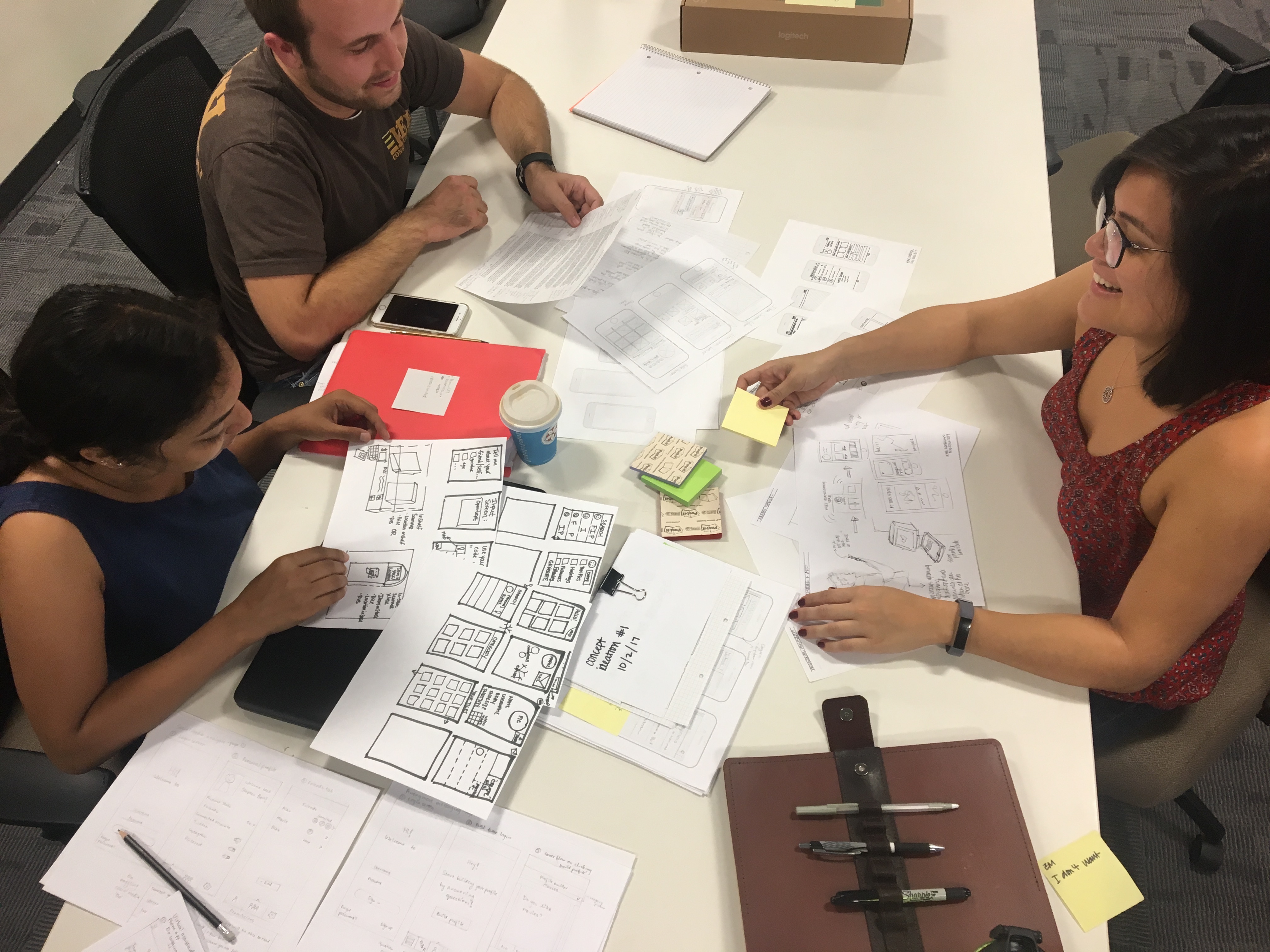 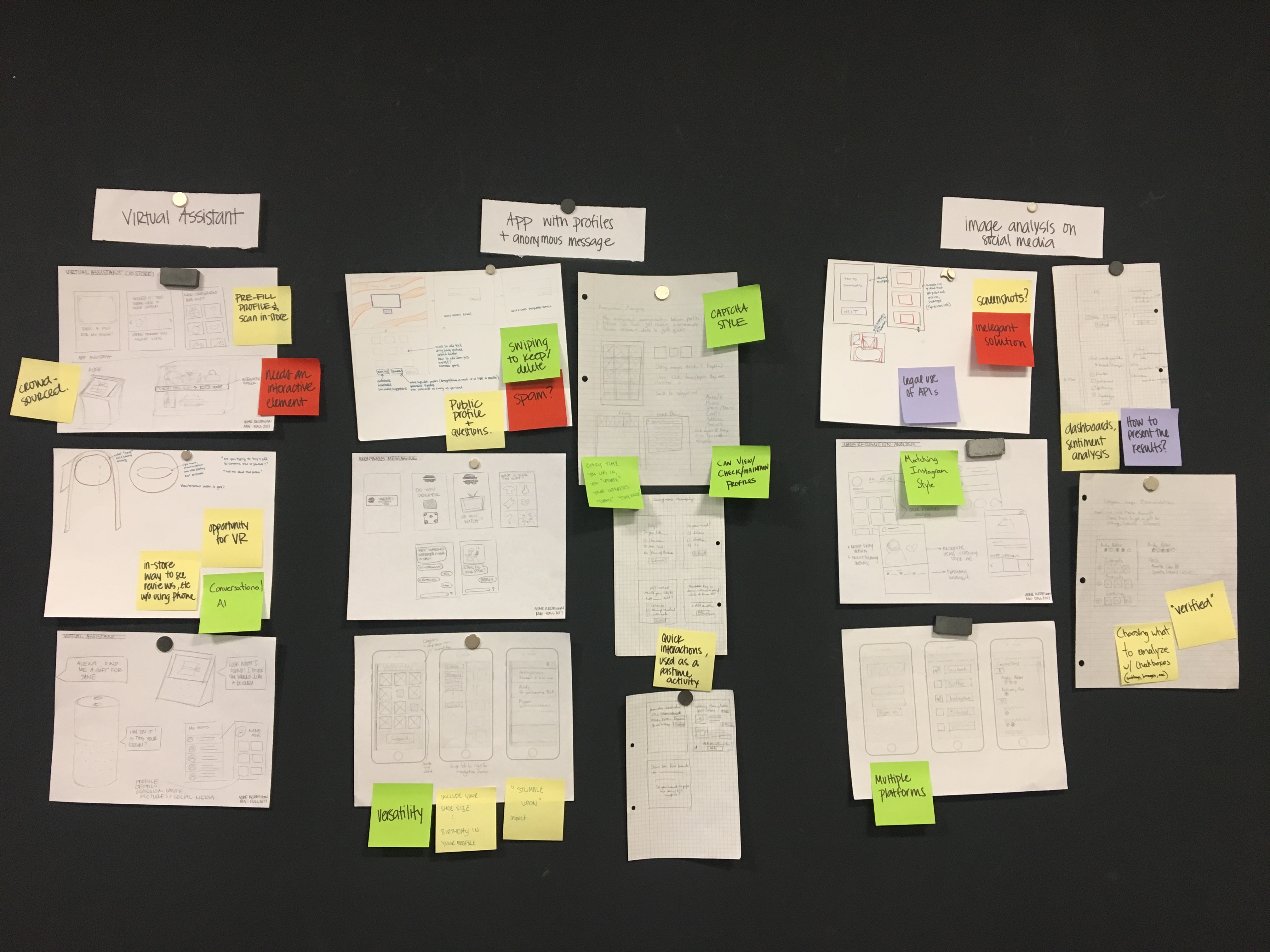 We pinned up the drawings and used sticky notes to mark positives, negatives and new ideas.

This was developed to leverage the wide presence people have on social media. Key features included being able to connect different social media platforms, adding and viewing your friends from the various platforms, choosing what type of data (images, videos, hashtags) to scan which generate gift ideas backed by analysis results. 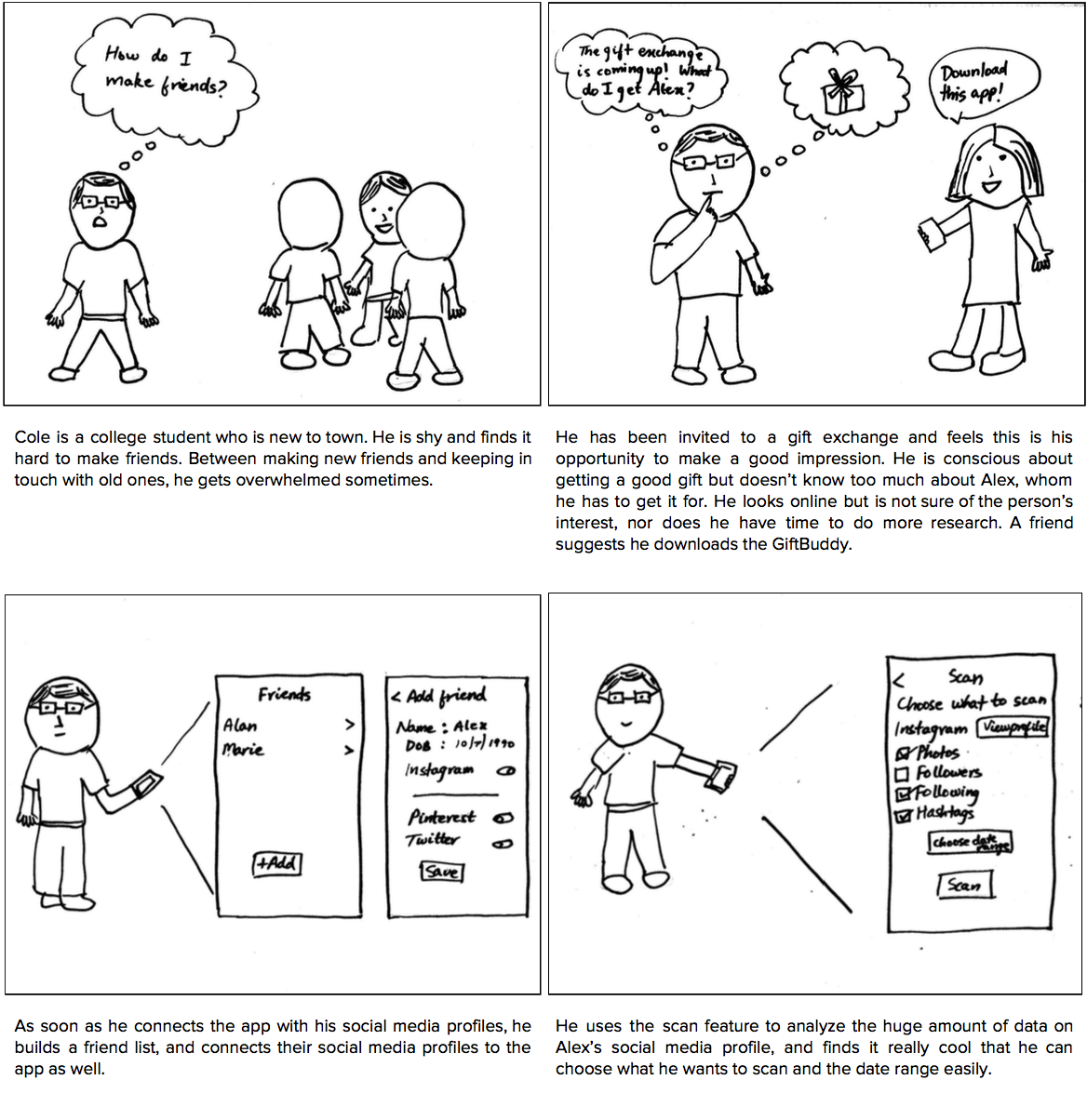 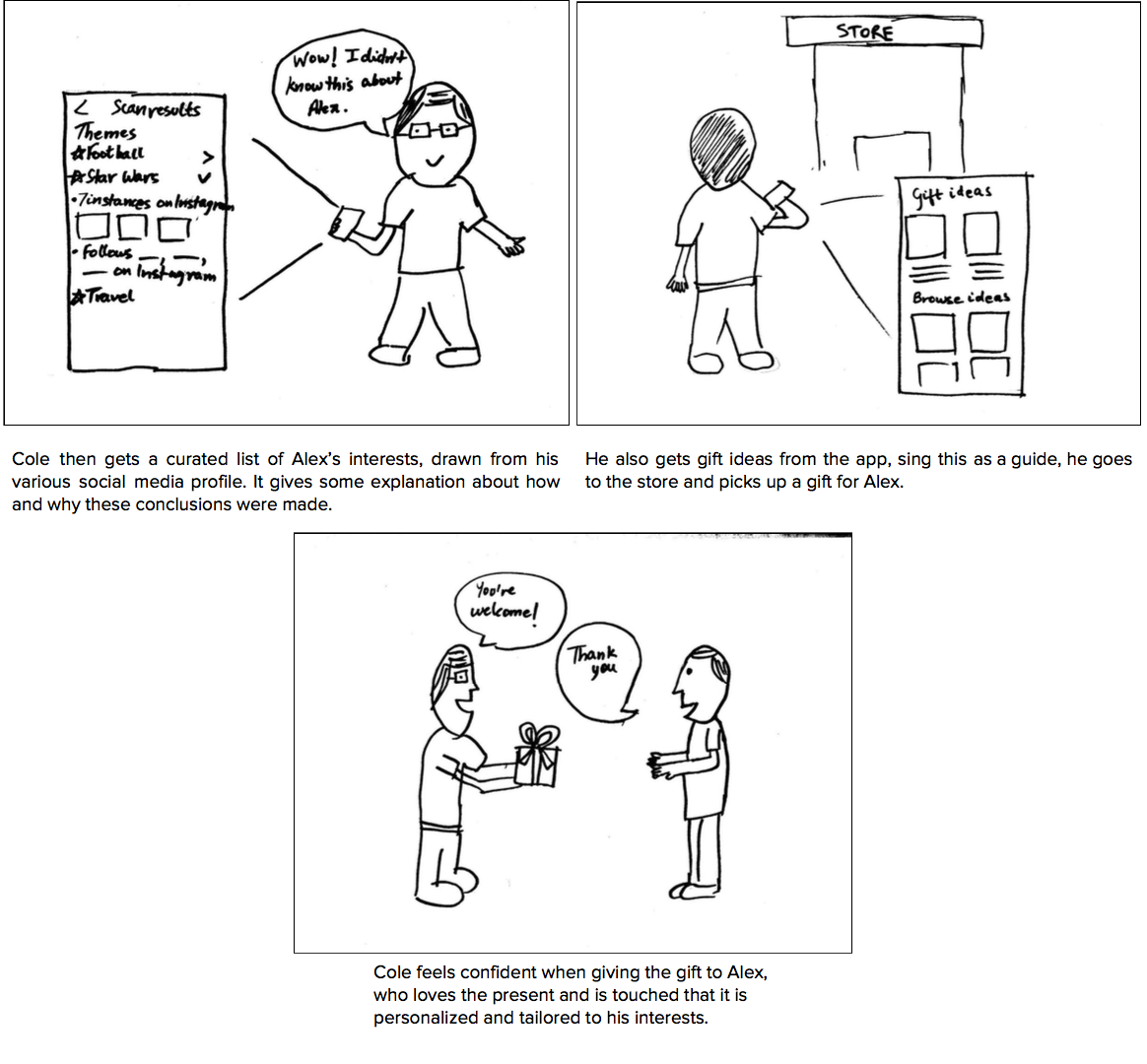 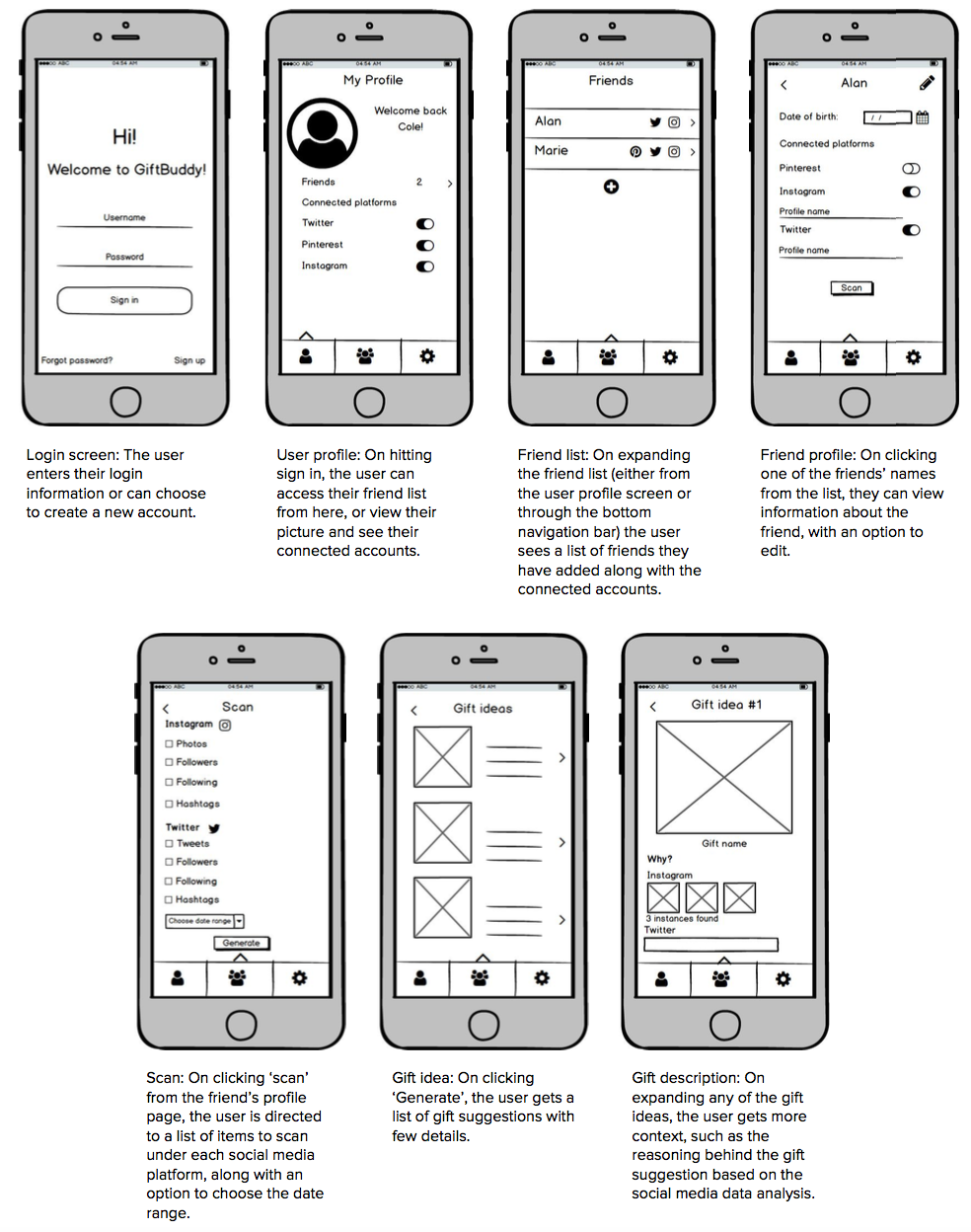 The idea behind this application was for a user to find out the gift receiver's preferences by anonymously messaging them. It would be a two-way application, similar to other social media. A user is prompted to frequently maintain their own profile by adding/removing 'tiles', or images of possible interests which are randomly generated. 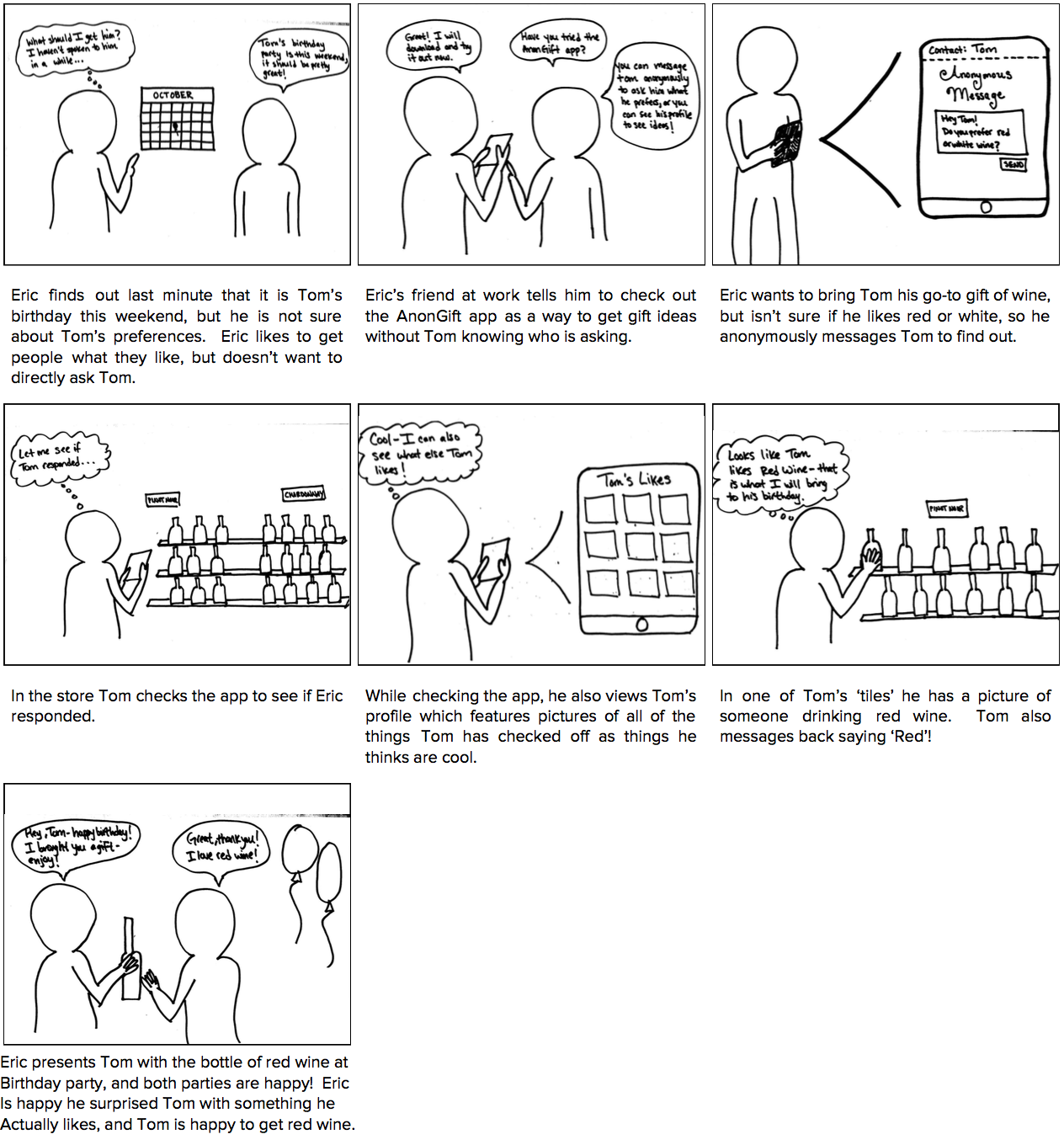 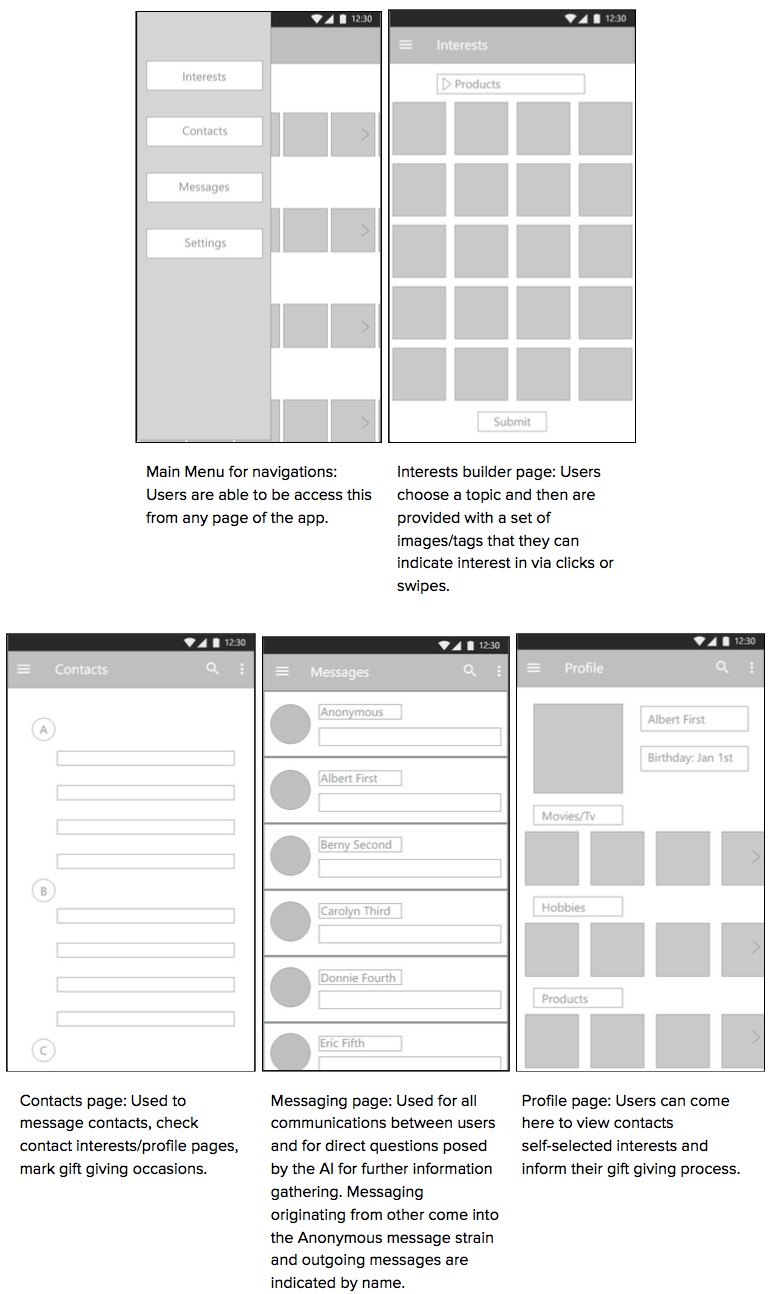 This developed out of the need for a more informative in-store experience, as users were turning to brick and mortar stores whenever they were running short on time. The intention was to have a kiosk which would suggest gift ideas combining whatever information the user had about the receiver along with the store's database of customers' buying trends and reviews. Another feature was to locate the item in the store for a more efficient experience. 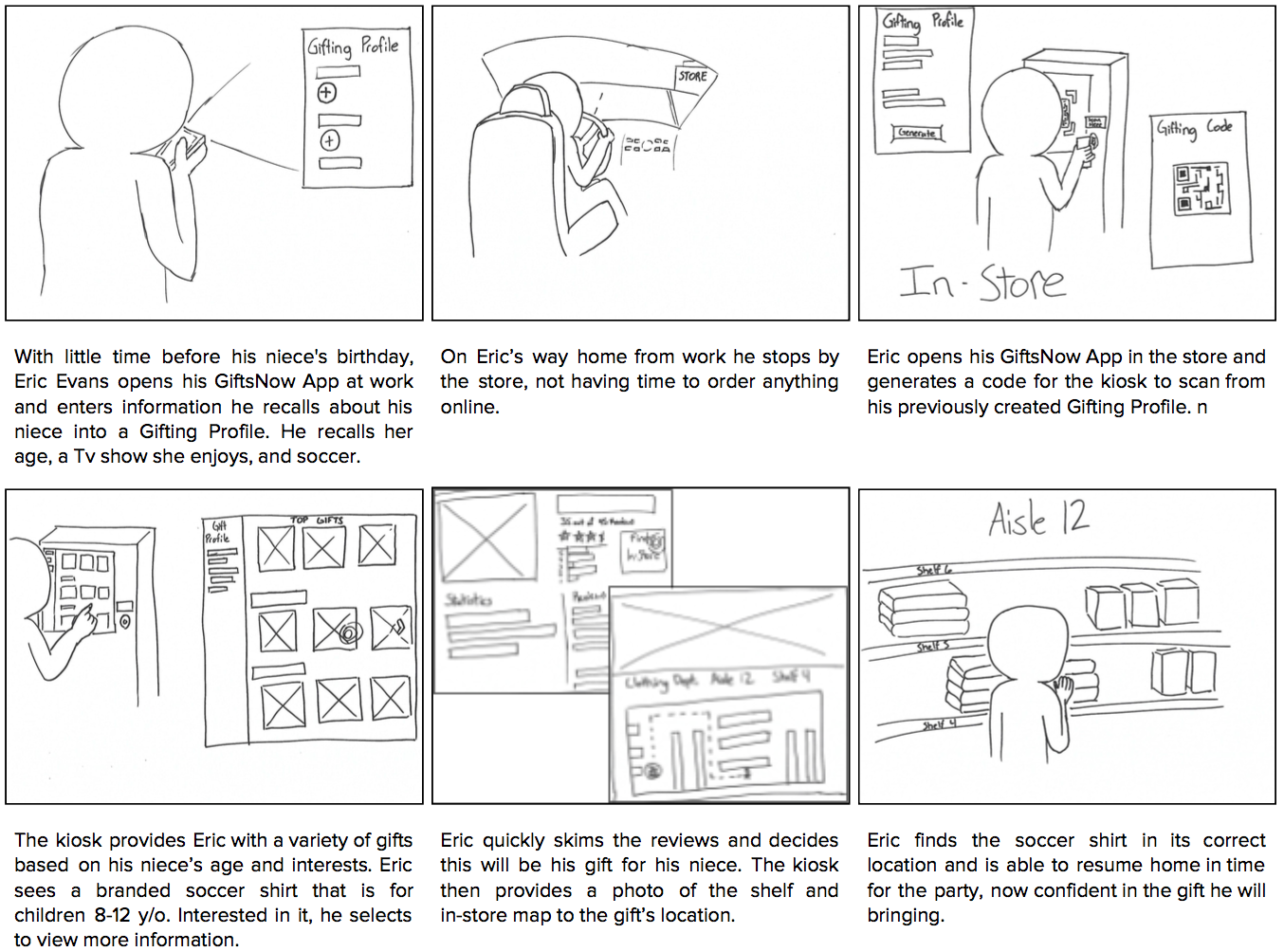 We asked different people what their thoughts were on the 3 ideas, what they liked and disliked.

Icons made by Eucalyp from www.flaticon.com is licensed by CC 3.0 BY 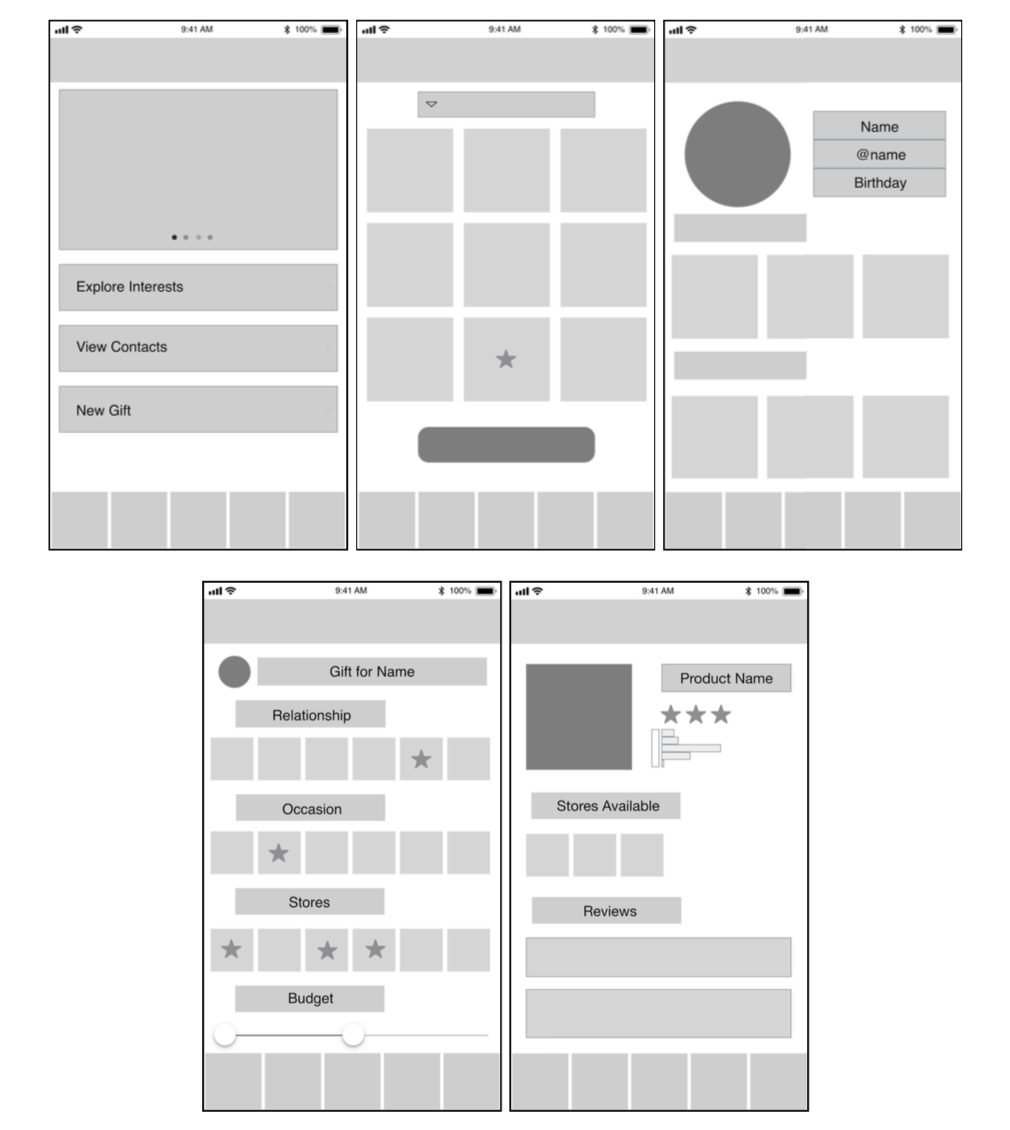 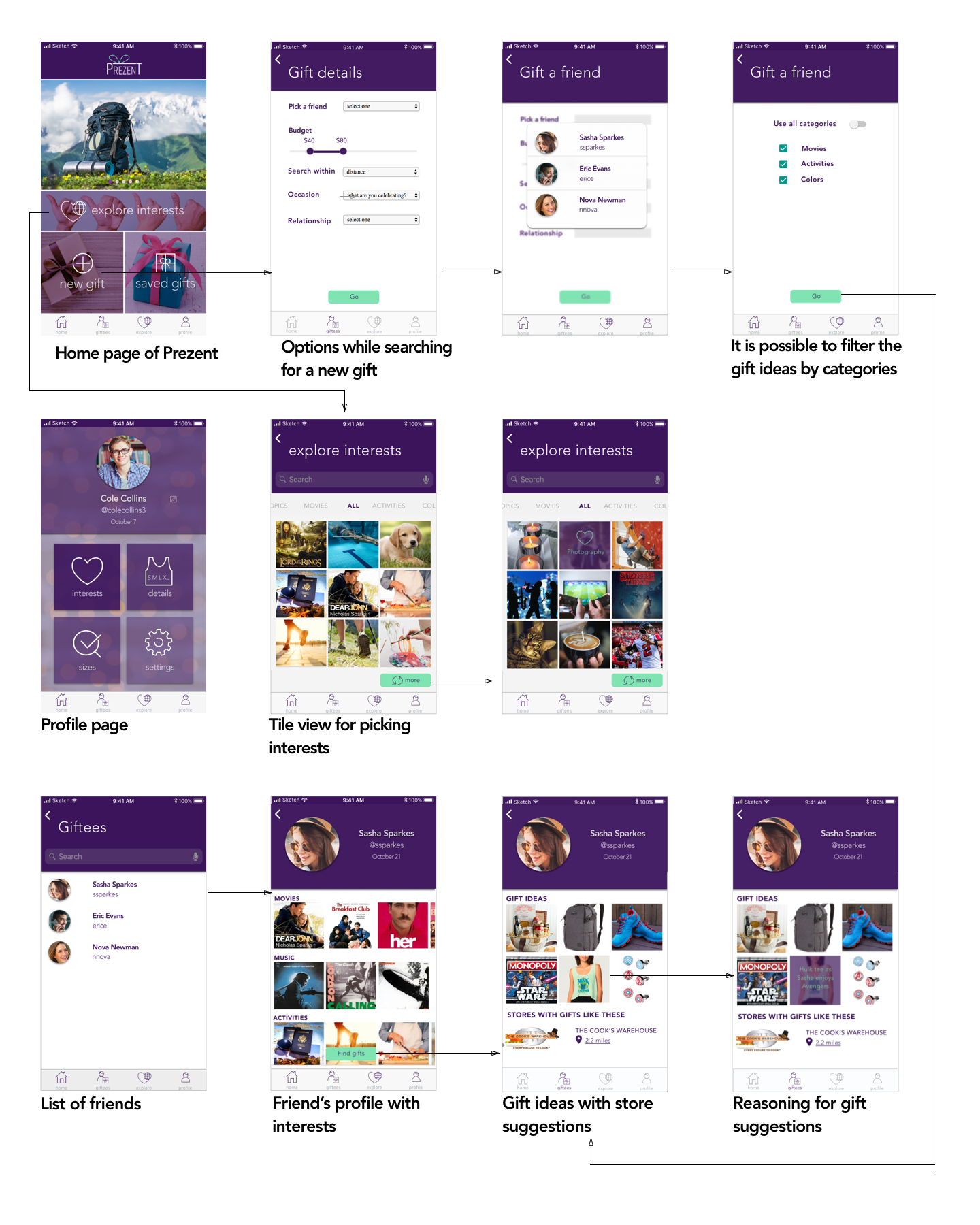